Wow, it's really been a long time since I have updated this. I need to change that. More to come shortly.
Posted by Heath at 8:15 PM No comments:

Two portable cabinets and a 184

Today I have the two portable cabinets as well as the Roland 184 keyboard. The 184 has 4 CV and gate outputs making it possible to use the modular synthesizer as a 4 voice polyphonic. The 184 also has a pitch bender, arpeggiator (up, down, up/down and random), unison and polyphonic modes as well as a portamento. It was originally designed for the Roland System 100M but was built with all jacks as 3.5mm and 1/4" which was excellent foresight. Although in hindsight it makes sense as the Roland System 700 used 1/4" jacks so they were making it compatible with both systems. Still, A+ for Roland.

This is a portion of the system as it will be. Truth be told, it already looks different as since the photo I changed the layout and added some modules that were not present in this photo. A fourth oscillator, Steiner filter, STG sea devils filter (EMS Synthi clone) and STG Post-Lawsuit filter ('clone' of the 4072 in the ARP 2600). The left cabinet is now pretty much comprised of nothing but oscillators and filters. 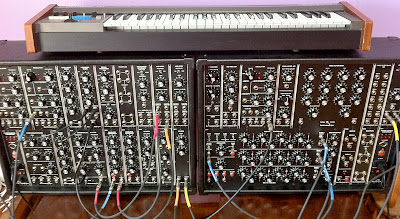 Start of the Modular


I'm assembling a modular synth finally. It's been a while in the planning and it is in 5U synthesizers.com format, but Im also adapting it to accept MOTM and Modcan modules in the future. I will track the creation of the synth as well as update this with music and such as it happens. The first module to arrive came before I even have the cabinet to put it in. It's the Synthetic Sound Labs Steiner Filter. It is modeled after the filter in the rare Steiner Parker Synthacon. The filter has separate inputs for low-pass, high-pass and bandpass modes and one output.

Tomorrow I will be getting another 1/3 of the system together including two portable cabinets with modules, but the steiner is the first to arrive. 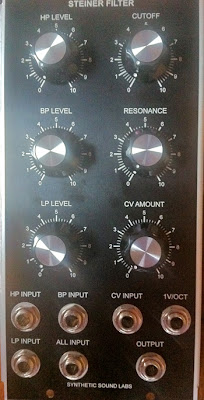 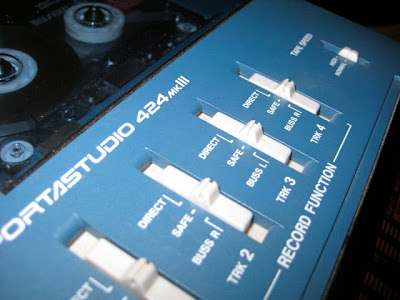 Well today I received my "new" Tascam 424Mkiii. I'm having fun playing around with a four track again. It brings me back to when I was a teenager and recording Cocteau Twins-ish songs in my bedroom (or trying to would be more accurate). Hopefully in the next few weeks I will have some interesting songs to post. Speaking of, If you get a chance please say hi or leave a comment. I would love to hear from you and get a feel for whose reading.
Posted by Heath at 9:41 PM 2 comments:

The Sound of Rocks 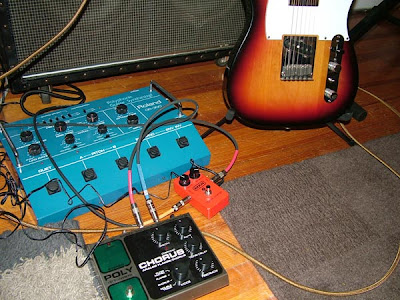 The way I used to record my music was running instruments into a Mackie 12 channel mixer and then running that into Logic. I decided to go back in time a little bit and start using a Tascam 424MkIII cassette recorder. After taking a hiatus from recording for a little while I have re-thought the direction I was going in. My older music rarely had guitars present, which to me is a shame since that was actually the instrument I started with. So now comes the Tascam and Zoom H4n field recorder to go along with the synthesizers.

Speaking of old songs, here is one I came across from 2006. This is from a collection of ambient songs I was working on.

The Leaves That Are Brown
Posted by Heath at 2:03 PM 3 comments: 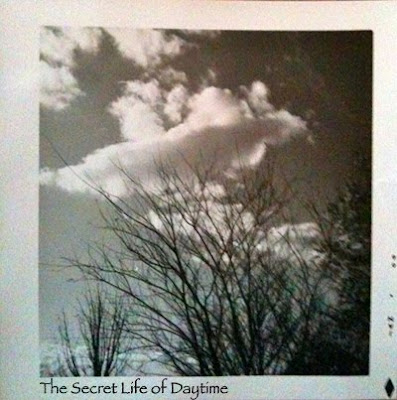 This site will be home to the band The Secret Life of Daytime which is a new musical project I'm starting. More information very shortly...

In the meantime here is a demo of a song I was working on a little bit ago. It gives an idea of the direction this project will take. Hope you enjoy it.
Mellow Coin Drops


Feel free to leave a comment, say hi or become a follower of this blog.
Posted by Heath at 7:53 PM 1 comment: